← more from
Righteous Babe Records
Get fresh music recommendations delivered to your inbox every Friday.

Hello Weakness, You Make Me Strong

by Gracie and Rachel 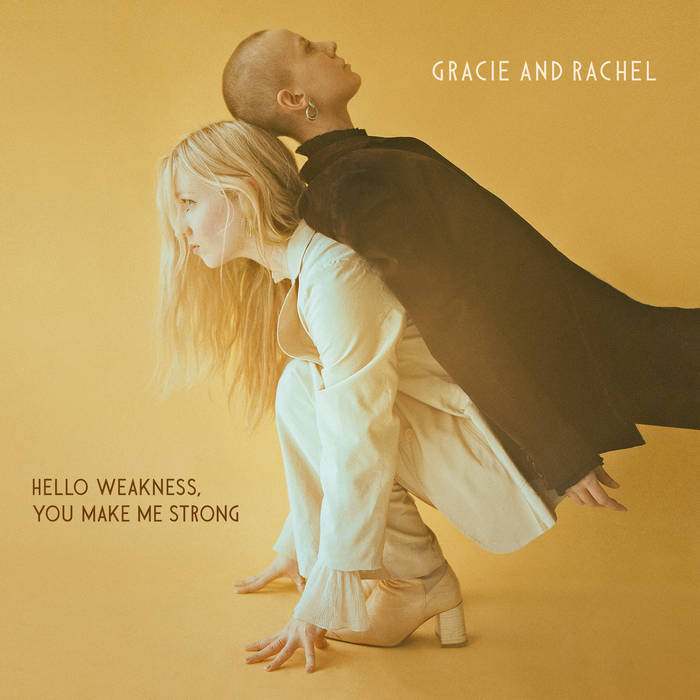 Iris Andrade If ever an album reflected the ideals of Kintsugi... this is the one. It is a contemplative one that helps me understand I am not alone in struggling creatively and just as a human being... we all have fears and worries and dreams and so much and this album helps to bring one to the present state. Thank you Gracie and Rachel for this bright offering of your creative outputs... it is beautiful and feels like helping hands helping when you feel like you're falling... Favorite track: Ideas.

Gracie and Rachel are magnetic fields: Opposites who attracted and never looked back. A decade ago, when pianist-vocalist Gracie and violinist Rachel met as high schoolers in a modern dance class at their public high school in Berkeley—where they grew up among the city’s progressive politics and encouraging spirit of artistic community—they were quickly intrigued by what the other had.

Rachel was a transfer student from a classical music boarding school who had started on violin as a child, spending her Saturdays at the San Francisco Conservatory, playing chamber music. This strict, regimented background was a clear foil to Gracie’s freer-spirited approach to songwriting and self-expression. Gracie, meanwhile, appreciated Rachel’s knack for structure, theory, and form. “We used to joke that Rachel gave me structure and I gave her freedom,” says Gracie. “That was our foundation in a way. And then we just started to dance with the two.”

These tensions—classically-trained and open-ended, dark and light, timeless and contemporary, certainty and the unknown—have become hallmarks of the modern baroque pop Gracie and Rachel have made ever since. And the power of Gracie and Rachel’s particular alchemy—that of a secret language between musical sisters, with a preternatural melodic sensibility—has never been more potent or realized than on their upcoming sophomore record, Hello Weakness, You Make Me Strong, to be released through Ani DiFranco’s label Righteous Babe Records on September 18th. “We wanted to bring a little more color into this record,” Gracie says of its expansive, beat-augmented sound, “to control the landscape sonically before opening it up to other people.”

And the results are tidal. With more focus on billowing electronics and hints of dusky but sharply-defined baroque-pop cadences, Hello Weakness, You Make Me Strong bursts open the pristine emotionality of Gracie and Rachel’s self-titled debut from 2017. These 10 bold, oceanic songs chart the crests and crashes of feeling and thinking that one might encounter in the process of perseverance, in working through uncertainty and inner-excavation towards self-possession—towards clarity. “The songs ask us to look directly into the eye of the broken mirror reflection in front of us,” Gracie and Rachel write in a mission statement. “The music is less interested in fixing what’s fragmented than it is in putting value on imperfections for all they’re worth.”

Gracie and Rachel, the collaborative duo of keyboardist Gracie Coates and violinist Rachel Ruggles, have been praised by NPR to “make unforgettable, surprising music.” The duo’s new album “Hello Weakness, You make Me Strong” explores the depths of their emotional states and the walls we build up inside ourselves. It’s music to excavate our inner fears and help us find the empowerment from within. ... more

Bandcamp Daily  your guide to the world of Bandcamp

Nightmares on Wax and Bremer McCoy stop by with their sublime new LPs.